Is it just me or is PVP not what it used to be? 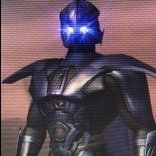