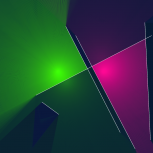 Possibility of Opening up the Code of Conduct to Discussion