Trying to MacGuyver a drumset together... 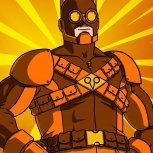 By humanowl,
November 13, 2020 in Base Construction