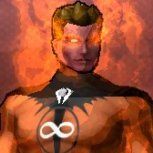 Have you found your ‘forever character’ yet?

By CaptTastic, Yesterday at 04:01 PM in General Discussion