Build Theory: Prepare for a *FLOOD* 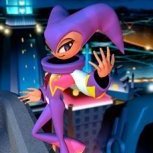 By AurianArchive,
October 28 in Guides