Some Thoughts and Questions about "Shard Culture" 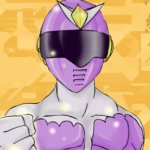 By SentaiLavender,
August 15 in Everlasting