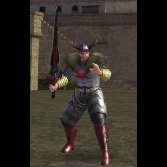 By Grog the Big,
June 16 in Art & Multimedia