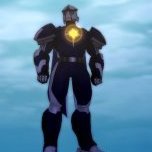 By Rocklord,
February 14 in Reunion (EU)