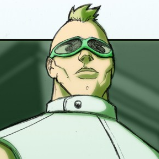 By Take One,
November 15 in Mission Architect