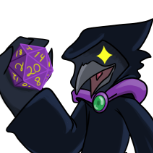 By Ravenwulfe,
Tuesday at 05:07 AM in Suggestions & Feedback