Demons & Hell in the City of Heroes Universe 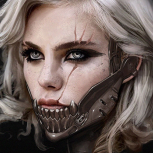