The Wheel of Time on Amazon Prime 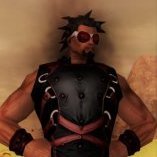