In Loving Memory of @Neutron Decay 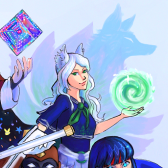 By Alimorel,
November 14, 2020 in Fallen but not Forgotten