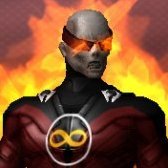 Do you have a 'main'? What makes a main? What's the main things about your main that made it your main?

By DrInfernus, May 22 in General Discussion